Snorkelling at the Mnemba Atoll in Zanzibar

We’re tiptoeing through the lush forest, desperately trying not to make a sound. It’s not as easy as it seems. Twigs snap underfoot, reverberating through the trees; dried leaves crunch and crackle, echoing in the stillness. “Sshh,” our guide Mohammed begs, aiming upwards to the canopy. In a barely audible whisper, he reveals the reason for our self-imposed hush: “Diana monkeys — the rarest and most beautiful on the island…”

With rays of sunlight glowing down on them like mother nature’s very own spotlight, five magnificent monkeys, all black and white with occasional streaks of chestnut, are preening and playing directly above us. We’re entirely entranced, observing these shy primates swinging between the trees for a few precious minutes. They notice us and disappear in a flash. Mohammed is beaming with pride: he hardly gets to show off the beauty and the beasts of Tiwai Island.

Few visitors visit this tiny wildlife sanctuary in Sierra Leone. Indeed, few visitors come to Sierra Leone, full stop. But that’s about to change. This West African nation is well known for its devastating decade-long civil war, it ended in 2002, fuelled by the diamond trade. In a cruel double-whammy, in 2014, just as Sierra Leone was enjoying a remarkable recovery, Ebola struck.

A saviour – the Sierra Leone Marathon

The country went on lockdown as close to 4000 people lost their lives. Sweet Salone, as locals call it, is now Ebola-free and back in business. Unusually, it’s the Sierra Leone Marathon that’s blazing the trail for returning tourists. In 2017, it won the accolade of Best International Event in the Running Awards and was described by Running magazine as “the world’s craziest and most worthwhile marathon”.

“Since we started in 2012, we’ve brought 600-700 runners here, and they’re now all advocates for the country and its beauty,” Tom Dannatt explains.

He’s the founder of UK charity Street Child, which arranges the event, accumulating funds for children and providing much-needed support for Ebola’s 12,000 orphans. The run is held around the large, lively market town of Makeni in the north, with around 160 international visitors and some 500 locals taking part in distances of 5km, 10km, a half-marathon or the full 42km challenge.

Before we pound the pavements on the big day, we visit some Street Child projects in a five-day package organised by the charity. We speak with village elders, parents, teachers and social workers. We have fun playing with kids in remote schools, making paper aeroplanes or kicking footballs around, and meet men and women in frenetic markets, caring for orphans with the help of Street Child. But most importantly, we see the happiness in the smiles of Sierra Leoneans and the warmth in their eyes: that’s what makes this marathon so worthwhile. 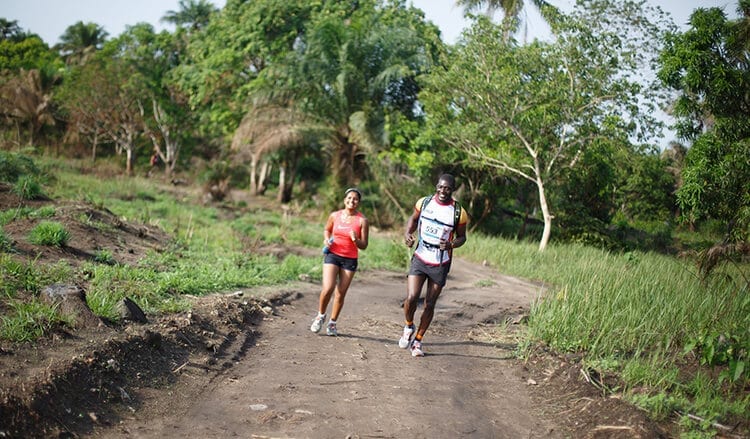 Running Sierra Leone is second to none

At 7.20am, in a sweltering 30°C, my 10km run kicks off. Spectators cheer us on outside their mud-brick homes, shouting “Oporto!” (‘White person’ in local Krio). Cheeky children high five us as we run pass while several people shout out, “Thank you!” The humidity is stifling and energy-sapping however after one hour and one minute, I cross the finishing line to deafening cheers, exhausted yet utterly exhilarated.

The revival of tourism

But there’s more to this beguiling country than the run. New tour operator Africa Marathons — part of Tailormade Africa — now offers add-on trips after the event. Its co-founder Rob Morley knows and loves Sweet Salone. “The marathon is changing people’s perceptions — travellers are gradually regaining confidence in Sierra Leone as a safe destination,” he tells me. “There are so many positives here: their religious tolerance and peaceful elections deserve credit, especially in today’s climate. It’s early days, and Sierra Leone’s still a work in progress, but it has huge potential and enthusiasm for tourism.”

We see that potential and enthusiasm on Tiwai Island. Sierra Leone’s first eco-tourism venture, this reserve on the River Moa benefits the eight communities living around it. Measuring just 12sq km, it possesses one of the world’s highest densities of primates, home to 11 different species and too rare — and elusive — pygmy hippos. Even though the hippos evade us, we see nature’s beauty as we stroll through forests with centuries’ old trees and squeals of chimpanzees.

Otters leave their paw prints on honey-coloured beaches and bats swarm out of ancient, sacred caves in nearby Niahun village, which is steeped in traditional culture: even the President made a sacrifice to the spirits herein hopes of winning the election. He did. From natural heritage to slave trade heritage, we head to Bunce Island, an hour by motorboat from the capital Freetown.

Strangler figs and vines move around the crumbling remnants of this once formidable fortress as if they’re trying to smother its tragic past. Our guide Abdulai Sankoh brings the island’s story to life. Between 1668 and 1807, around 50,000 men, women and children left these shores in shackles for the New World; many died en route.

We view their grim cells, the rooms where they were branded with burning hot irons once sold, the graves and cannons that lie neglected in the grounds. Heavy and haunting with melancholy, it’s an essential destination for slave descendants who travel here from the southern states of America to understand their ancestors’ past. Thankfully, plans are afoot to preserve Bunce’s heritage for future generations and to stop its creeping decline. 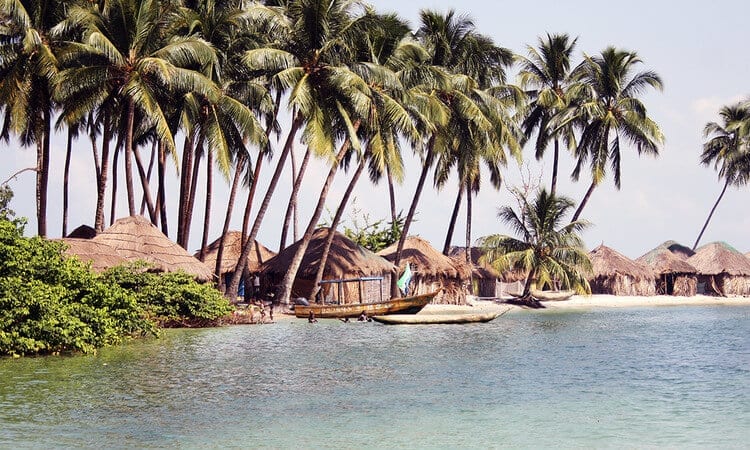 The abandoned buildings of the Africana Resort on Tokeh Beach, ransacked during the war, share their own story — one of the joyful times in a country that once drew thousands of visitors to its azure seas and palm-fringed beaches. I’m shocked by the beauty of Western Area Peninsula’s coast: no wonder it became the playground for French celebrities and famous parliamentarians.

Jungle-clad mountains fringe the horizon as we walk for miles on sand as soft as white pepper to reach River Number Two beach, the setting for the iconic Bounty adverts of the 1970s.

We wander past traders plying their wares of paintings, colourful fabrics and carvings on the shore; youths sell mouth-watering fresh juice in coconut shells; fishermen set off in dhows with white sails billowing in the cool breeze.

And as the sun sets on our last day here, bathing the beach in a glorious golden hue, I’m hoping it will rise on a brighter future for this, brave, resilient and beautiful country.

Writers Credit: Thank you to Sue Watt for another inspiring piece from her favourite African destination.