A Tanzania safari undoubtedly offers the most diverse attractions on the continent. It has more World Heritage Sites than any other, a vast coastline, the highest peak, the deepest lake, sweeping savannahs and forested mountains. And it is vast. So if you’re planning a visit, you have a lot to consider.

The Serengeti National Park forms the core of the 30,000-square-kilometre Serengeti-Ngorongoro-Mara ecosystem. This diverse landscape plays a significant role in the world’s most famous mammalian migration, which involves some two million wildebeest, zebra and other ungulates. But even when the migration is out of range, the sheer volume of predators and grazers that inhabit the Serengeti makes for unforgettable game viewing, with a good chance of spotting all three large African cats: lion, leopard and cheetah.

Most Tanzania safaris focus on the plains southeast of Serengeti, site of most of the large lodges, but for those with sufficient time and resources, it’s worth heading further north to the remote Mara River region or the Western Corridor.

Mount Kilimanjaro towers almost 5km above the surrounding dry plains, and its snow-capped peak ranks high among Africa’s top travel icons. The highest loose standing mountain in Africa can be reached over a 5-9 day hike, a trip that is often appended to a more conventional northern Tanzania safari.

A tip here: The longer the ascent, the lower the risk of altitude-related sickness. 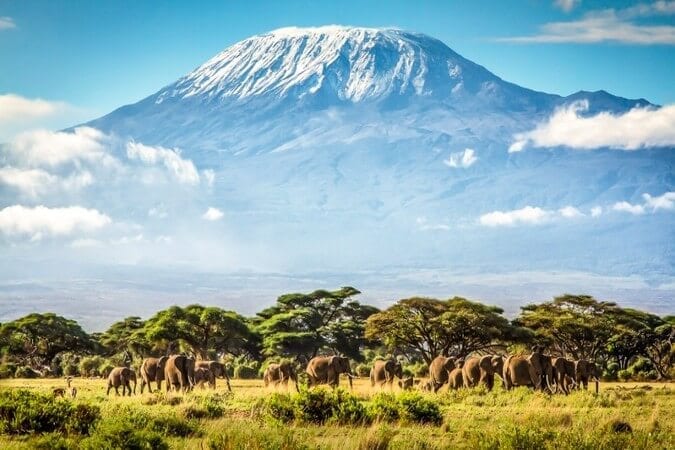 The steep, forested slopes of the Mahale Mountains National Park are home to approximately 800 of Africa’s remaining wild chimpanzees. As the park is inaccessible by road, the trekking of chimps and other primates through the park’s rich woodlands is done on foot – expect to be exhausted but exhilarated. The park sits on the shore of Lake Tanganyika, so you can happily rest your weary legs on one of its beaches, enjoying some of the most luxurious accommodation on its shores.

Chimpanzee trekking is a must-do activity on a Tanzania safari.

The vast alluvial plains of Katavi are barely visited at all, which is one of its most significant assets. Miles off the beaten track, Katavi is superb in the driest months of the year (May-October and December-February), but unpredictable (and partially impassable) during the remainder of the year.

The intrepid few who do venture the distances are well rewarded, as the park is home to vast buffalo herds and hippo pods, and large concentrations of elephants around February. Following the short rains in November, the larger game disperses, but birdlife proliferates.

The largest protected wildlife area on the African continent, the Selous Game Reserve is more prominent than Switzerland. Only a few thousand visitors come to experience the wonders of this UNESCO World Heritage site annually. The lagoons, sandbanks, lakes and shores of the Rufiji River host a wide array of wildlife and make the entire area an exciting environment for walking, boating and fly-camping safaris.

Tanzania’s second-largest national park, Ruaha is largely under-visited and a very worthwhile destination for great game viewing, especially when combined with the Selous. A wild and distant safari experience, its dry red-earth vistas are studded with ancient baobabs and irrigated by the rocky meanderings of the Great Ruaha River.

The ecosystem here supports one of Africa’s largest elephant populations, plentiful lion prides and thriving packs of African wild dogs. Leopard sightings are also frequent, and the park is a birdwatcher’s delight. A truly delightful part of a Tanzania safari.

The baobab-studded grassland of Tarangire National Park , just two hours drive from Arusha on a surfaced road, peaks in wildlife activity during the second half of the year. This is when the Tarangire river becomes the only reliable source of drinking water for miles around, attracting large herds of elephant, zebra and other grazers. It can also be pretty good for lion and leopard, as well as smaller predators such as mongooses and genets.

The Tarangire National Park at the right time of year is a must visit on any Tanzania safari.

Its name alone stirs thoughts of an exotic paradise. And although its current popularity and status mean it’s no longer yours to enjoy alone, its powdery white sand beaches, lush forests and sultry, spice-scented alleyways still justify those initial sentiments.

Zanzibar is the perfect safari combo and way to end off a magical Tanzania safari enjoying a few days of relaxation and sunshine.

Let us chat with you to find out what your travel wishes and desires are, for us to piece together your tailor-made Tanzania safari.

Thanks to Travel Africa Magazine for the great contribution in this piece.