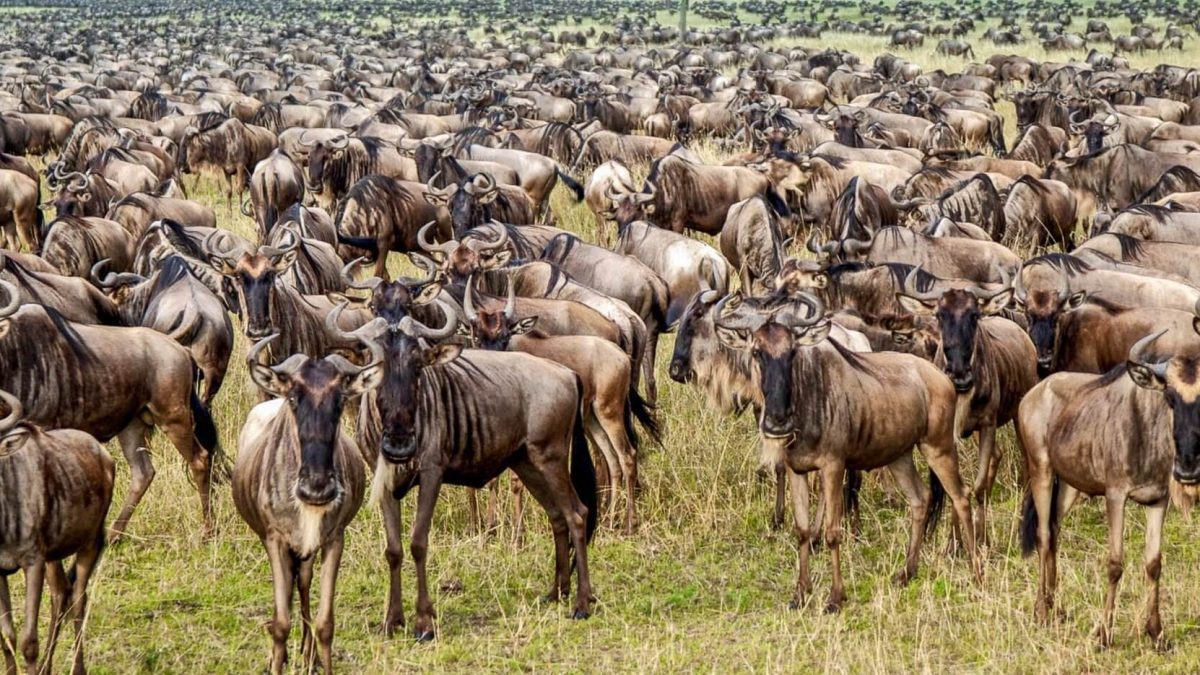 What is it that makes a wildlife migration such a magnificent spectacle for the eye and the mind? Is it the sheer abundance of wildlife in motion? Is it the steep odds to be overcome? Is it the amazing feats of precise navigation? The answer is all of the above.

One of the worlds most impressive wildlife spectacles has to be the Great Wildebeest Migration in East Africa. Tanzania and Kenya to be more specific. One of our directors spent 2 years guiding in this region specifically to work the migration and he rates it as the finest most exciting experiences to have on safari. Having over Two million animals made up of predominantly Wildebeest but also Zebra, all moving together in a circular motion from the Southern Plains of the Serengeti to the northern regions of the Masaai Mara and surrounding areas and back is like nothing else out there. The great Bisson migration of North America the only thing that surpassed it when it existed.

This migration has the added benefit and excitement in that the animals have to cross 3 major river systems, all teaming with Crocodile. Should they make it past those water predators and avoid being trampled on by others or drowning then Lion, Leopard, Cheetah and Hyena all lie in wait on the other side. The sheer volume of animals lining the river bank waiting for one to jump in and start the haphazard crossing is staggering, as is the noise, the dust and general chaos that shortly ensues. It is emotional and breathless, heartwarming and ruthless all at the same time. If you have the time and the budget to see this event then do so.

It is not as straightforward however as you might think to plan your safari around this. There are 3 times of the year when river crossing migration experiences can be had. Late April to very early June sees the majority crossing the Grumeti River in the Western corridor of the Serengeti, Mid June through to mid August is the absolute best time to catch the crossing the Mara and Talek Rivers, and then again in late October as they return back across the Mara, Talek and Bologonja Rivers heading from Kenya to the Southern Serengeti. it has to be said though that the Wildebeest cross and re-cross various points of the river in the north all the time as they split up in search of fresh grass, so assuming you can afford to have at least 3 or 4 days up in that region you stand a very good chance of not only seeing them, but having at least one river crossing experience.

This next part is really important. In July and August please do not go to Kenya's Masaai Mara to witness the migration. There are too many lodges and camps in this amazing national park and outlying conservation areas and thus hundreds of vehicles lining the river banks to watch the migration. There is no etiquette here and we have personally witnessed just under a hundred safari vehicles at one crossing point, Guides and clients all shouting at each other jostling for position, people getting out of the vehicles and thus scaring all the Wildebeest away. It is soul destroying. If you wish to have a Kenya migration safari experience then you do have to pay for it in order to get a reasonable and wild migration experience by going to camps away from the masses. Please do speak to us before booking any trip to Kenya for the migration.

This migration of zebra was only discovered as recently as 2012 as much of the land the animals travel though is largely inaccessible and also it wasn’t thought that zebra would travel so far. It is now common knowledge among wildlife enthusiasts that large numbers of plain’s zebra (known as Burchell’s zebra) travel in a linear motion, i.e. straight northwards and then directly back the same way southwards, every year, some of them covering 1000kms making it, in fact, the longest ‘land’ animal migration in Africa! The Zebra is resident in the Chobe and Kwando regions of Botswana and Namibia during the African dry, winter months and they then start moving south when the rains come at the end of November, beginning of December. It is thought that they don’t actually begin their journey until the rains actually fall on the Nxai Pans of the Kalahari which are some 250kms away!

These incredible beasts can sense water from that distance, what remarkable and sophisticated animals they are compared to us, humans? The journey there for many takes just 20 days. For others, it can take them up to 40 days as they don’t take the most direct route and in these cases, they can cover distances of up to 400kms, and it is this along with their return journey, which makes it the longest migration ever. They remain in the Nxai Pans for about 80 days and then by the end of February, beginning of March, they return northwards and this time all of them taking a longer route, typically covering 500/800kms to reach ‘home’. Some arrive at the rivers as early as April while others take until July to reach their destination.

Botswana is home to a further and similar zebra migration covering an almost exact distance and time as the aforementioned. These zebras begin their travels from the South-Eastern Okavango Delta journeying southwards towards the Makgadikgadi Pan National Park. Similarly, the animals leave the Delta for the new grasses of the pans in November/December time with the arrival of the first rains. Their journey takes a few weeks, they stay there for a few months before returning to the Delta by March and the dry season ahead.

Scientists have discovered that the new grasses in the Makgadikgadi have a noticeably higher level of protein and mineral content than those growing in the Delta areas so maybe it is for this reason that these creatures follow this migratory route every year. However, scientists have also found out that only 55% of the zebra migrate while the other 45% of its population doesn't move at all, but they don’t know the reason for this!

If you have already been on safari to Africa before but are wanting to return to experience something different then a visit to either Nxai Pans Camp or to Jacks Camps in the Makgadikgadi might just be the answer. Travelling to either of these salt pans in the mighty Kalahari during the lush season of December through to March may give you the opportunity to see this migratory zebra spectacle along with a number of hungry, opportunistic predators close on their tales!

Furthermore, babies will be plentiful at this time of year and the rainy weather provides dramatic skies, fantastic for photographing. Why not combine this with an add-on trip to the Victoria Falls; marvel through the mist at Mosi-Oa-Tunya and experience its thunderous smoke.

Conversely, for first time safari goers, the best time for to visit the ‘orthodox’ safari destinations of Botswana; i.e.: Chobe, Linyanti, and the Okavango Delta, is during the drier months of June through to November. It is then that the Kalahari provides a sharp contrast to the latter safari spots. Oppressively arid and almost barren, and devoid of its migratory zebra, the salt pans boasts other great creatures, such as quizzical meerkats, brown hyena and aardvark.

Adventure out onto to the plains on quad bikes, sleep out in the open beneath the impressive milky way or even take a cultural visit to the San Bushmen and learn how they can smell water from miles away just like those inspirational zebras!

A little like something out of an Alfred Hitchcock horror movie. Over 100 Million bats converging on a small area of the Kasanka National Park in Zambia is the largest Mammal migration on the planet. They are the Straw-Coloured Fruit Bats and when they come from their normal residence in The Congo they are located in the Mushitu Swamp of aptly designated Bat Forest. It is here that they come to feed on the fruits of the impressive Masuku Tree.

There is a very short window of time in which to see them between late October and Mid December every year and very few camps to accommodate visitors. It is hard to imagine anyone NOT being impressed and in awe of this spectacle, but in our opinion suitable as either part of a much longer trip or for the experienced Africa safari traveller.

What is a wildlife migration?

Wildlife migration is the seasonal movement of wildlife along migration routes or migration corridors. The migrations in Africa are often within a country or two and are mostly when wildlife are looking for better feeding grounds or where water is more abundant. Wildlife movement is often over a few hundred miles and many times contain danger from predators and other hardships along the way. Africa is home to some of the worlds most famous wildlife migrations, such as the Great Wildebeest Migration across Tanzania and Kenya and the longest 'land' migration of Zebra across Namibia and Botswana to name but a few.

What is a bird migration and how does it differ from an animal migration?