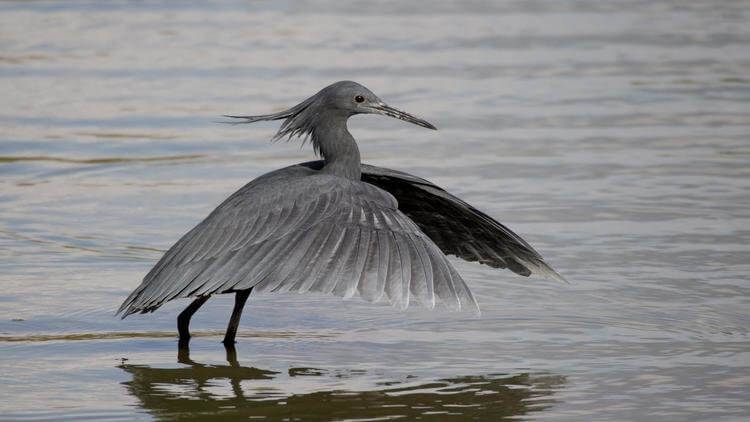 It is a bird or is it a bin liner? Has somebody lost their umbrella? What is that strange black object flapping about in the shallows? Could it be a black heron?

A black fishing heron (Egretta ardesiaca) is a bizarre sight. With its head and legs hidden, and its plumage shuffled into a puzzling conical arrangement, it barely resembles a living creature at all. But keep watching. This bird knows precisely what it is doing.

What do a black heron and a canopy have in common?

Everything apparently. Once in a likely fishing spot, a black heron extends its wings to form a conical canopy that reaches to the water’s surface and completely encloses its body, like a Victorian melodrama villain flourishing his cape. This is not just for effect: the resulting shadow is a tempting refuge for unsuspecting fish, which swim to within point-blank range. And with the glare taken off the surface, the heron has a crystal-clear view. Wham! Gulp! A lightning-fast strike of that dagger bill and it’s all over. 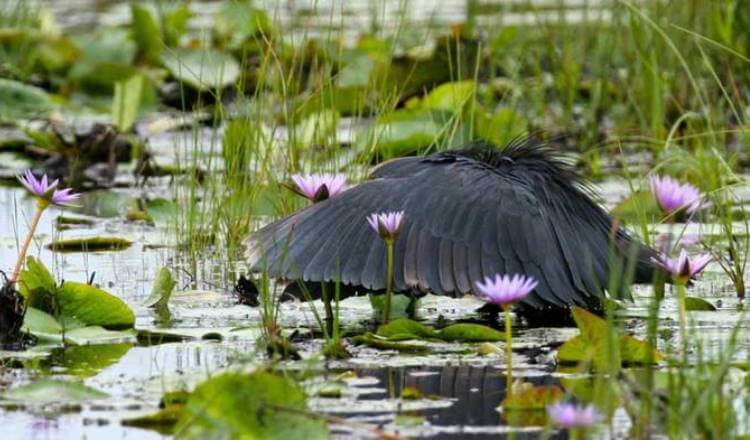 This unique strategy is called ‘canopying’, and it works remarkably well. Job did, the feathers fall back into place, the head emerges, and the black heron becomes a bird again. Train your binoculars on its slim form, and you’ll see that in size and shape it resembles a dark-grey version of a little egret, with similar long neck and legs. Like a bit of regret, it also has bright yellow feet, which may be an additional lure to fish.

Black herons form large breeding colonies, often joining other heron species. Each female lays her clutch of 2–4 dark blue eggs in a twig nest that a pair builds together in a tree or reed bed overhanging the water. As soon as the youngsters have fledged, they set out to master the fine art of canopying.

Where can you find a black heron?

Look out for this bird anywhere across sub-Saharan Africa, including Madagascar. It is widely but patchily distributed across wetland habitats, from the edges of lakes and lagoons to marshes and even rice fields. In some places, fishing parties of 100 or more may gather, each working the shallows under its canopy in search of small fish, frogs and other aquatic morsels.

The last black heron I saw was at Mabamba, on the Ugandan shores of Lake Victoria (pictured above). At least, I think that’s what it was. By the way, has anyone seen my umbrella?

Thanks to Mike Unwin for this piece on the black heron.