Becoming One With Painted Wolves

Uganda one of my favourite safari destinations

I’m not sure what it is precisely, but Uganda was my favourite country that I travelled through in the early ’90s. Perhaps it was the unsurpassable Queen Elizabeth National Park, or happening upon Lake Victoria and all the legends of the great explorers that it created, along with our mistaken belief that we were at the source of the Nile.

It could have been the fact that we had just spent a gruelling – though thoroughly entertaining – month embarking through the Congo (then Zaire) and survived all the trials it had thrown at us. It could merely have been seeing the remarkable recovery the country had undergone in such a short time, following the brutal dictatorship of Idi Amin. Or maybe it was simply its welcoming people – including the man who told me the world was going to end in a couple of days, and the fact it didn’t.
Whatever it was, Uganda mesmerised me. And left me with a sense of wanting to return.

A mountain to climb

As we left the border with Zaire, we travelled along narrow, mountainous twisting, dirt tracks. The kind that caused my heart to stop when I saw the massive drop that was close to our truck’s wheels, which was too often to be healthy for a man terrified of heights – and plummeting down a cliff for that matter.

We came to rest in a small village and camped by a lake. The area reminded me of the Lake District back in the UK. It was peaceful. Locals were fishing from log boats, others swimming, and kingfishers dive-bombing for food.
Nearby was a little shed, with a stool visible inside. A spray-painted sign over the door proclaimed to be the ‘Bar’. Next door, a similar-looking construction had employed the same sign-maker; this time the scrawled writing stated ‘Hotel’. To look at it, though, I thought camping was the more comfy option.

We ventured to the bar and partook in bottles of the local brew.

The following day was spent driving through magnificent –yet terrifying, for reasons mentioned previously – Lord of the Rings-type mountain landscapes.

We stopped in the town of Kibale, which will be known forevermore as a chocolate paradise. For the first time in a long time, bars of Cadbury’s Dairy Milk adorned the shelves of the ‘supermarket’. Practically orgasmic at the sight of such luxurious indulgence, I stuffed two bars down in a matter of seconds and immediately felt sick – my stomach unable to cope with such decadence after five months on the road.

Cravings satisfied, we continued, heading for the Queen Elizabeth National Park, when the heavens opened. We scrambled to roll the sides down on our Bedford truck. However, the two front plastic windows had shredded going over bumps in Zaire and the water flooded – on top of me. I was soon drenched. Still, it would save having to find a shower later. With my companions assistance, we rigged up a groundsheet to keep the worst out. A real case of the rain coming down in sheets. 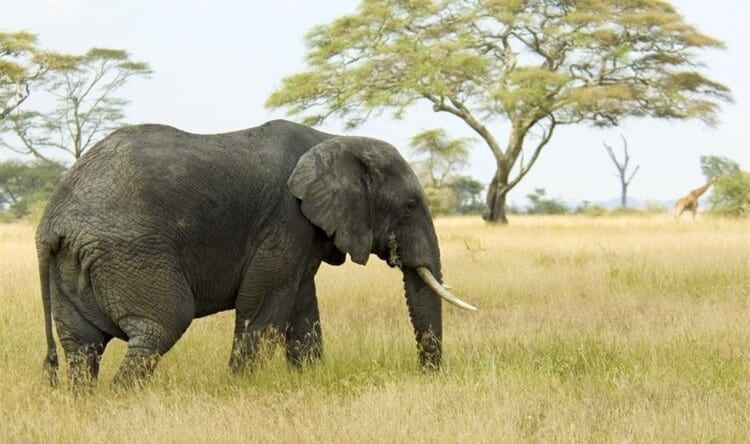 Arriving at the park, my excitement was anything but dampened, however. As we trundled towards the campsite, we were greeted by the sight of buffalo grazing, various antelope scampering and warthog snuffling.

Suddenly, a giant hippopotamus wobbled out in front of us, causing us to come to an abrupt halt – an unexpected, but welcome, shock. I scouted the panorama, but couldn’t see any water. What was it doing out here?

We camped on top of a slope, looking down on one of the park’s lakes. As we settled down for the night, we could hear hippos grunting nearby.

They were congregated in the water, just 50 metres from us. Dotted around, not far from our tents, were piles of manure. We were in the middle of a hippo minefield.

A restless night ensued as I prayed we hadn’t inadvertently pitched our tents on the hippos’ path from bush to water. I’m not sure they would have thoughtfully slalomed through us. In hindsight, we would not have positioned the campsite in such a spot – but hindsight is a great thing. The noises of the African bush at night are something else altogether.

The next morning was an utterly fantastic day. A drive through the park, at this stage in my African journey, was the best game-viewing I’d ever experienced. It has only been surpassed since by my trip to South Luangwa in Zambia a couple of years ago.

We encountered buffalo, more antelope, numerous warthog and no less than three separate herds of elephant. At this time, there were very few elephant – a couple of hundred, according to our guide – left in the park, having been poached nearly to extinction in this area; while rhino had been wiped out completely. Today, following massive conservation efforts, the park’s elephant numbers are at a much healthier level – around the 2500 mark.

We watched the herds make their way across the plains, striding out in single file – a line that encompassed several generations, from the great matriarch to the tiniest (in elephant terms) infant.

Later we found three lions stalking in the undergrowth – another rare sighting, our guide told us, because Queen Elizabeth’s lion population is usually located on the other side of the park, some 120km away.

In the afternoon, we boarded a safari boat and pottered down the Kazinga Channel, which links the lakes, Edward and George. We manoeuvred between the hundreds of hippo that lined the water. God, they are ugly creatures. But to see such huge pods of river horses has to be one of the great sights of any safari.

Birds fluttered into land on these floating brown islands, seeking refuge from the rigours of the day. Occasionally a hippo would raise its head above the water and give a great yawn, showing off its menacing-looking incisors, sending birds back up into the air. We also happened across a pair of copulating hippos, which is an eye-opener, to say the least!

Buffalo joined them in the water, and an elephant strode to the water’s edge, sucking up trunkfuls of thirst-quenching liquid. Sometimes hippo would go underwater before re-emerging to spray water a few feet from our boat.

But the piece de resistance was witnessing one marking its territory by having a poo and then whipping its tail, spraying the excrement in a wide arc, splattering everywhere. A prime example of the [poo]hitting the fan.

The end of the world

That evening, still on a complete high, we left the park behind us and camped up in a mining town at the foot of the Mountains of the Moon. We played football against some local kids. We may have lost 2-1, but it was a great effort from the lads, and we were “over the (mountains of the) moon, Brian”.

The next day we crossed back over the equator, returning for a while to the northern hemisphere. An enterprising local demonstrated the fact that water swirls anti-clockwise on one side of the ‘line’ and clockwise on the other. I’ve seen it with my own eyes – but, alas, this phenomenon has been proved to be a fallacy, and it appears a magic trick duped us.

A couple of days later we arrived in Kampala, Uganda’s capital, via a look at the vast expanse of water that is Lake Victoria, long thought to be the source of the Nile. Another fact that has proved to be a misnomer.

As a few of us wandered around the city, a man accosted us, asking: “Do you know anything about telepathic communications?”

“I knew you were going to ask me that,” Martin replied.

The joke washed over him, as he continued with his sermon. He told us that the third world war was imminent and that it would start here in Uganda.

We asked him to make sure it held off until we’d left the country.

Thank you to Phil Clisby for his contributing story.