The Big Five of the Sea

What To Consider When Packing For Your First Safari? 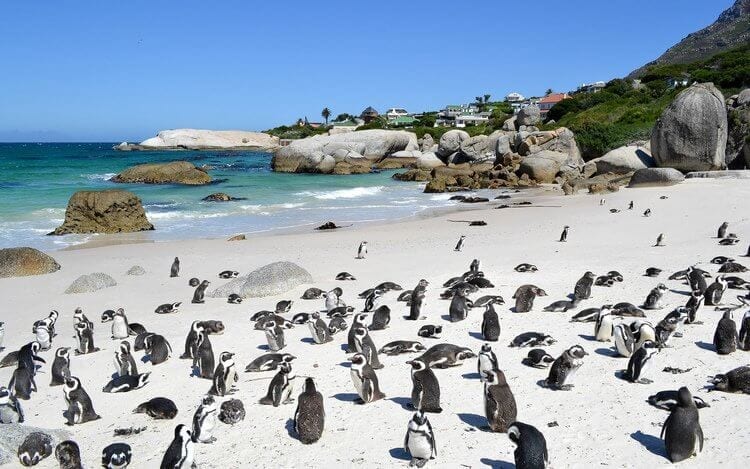 We all know the Big Five – lion, elephant, leopard, rhino and buffalo. You can find these animals on many safaris. However, there is a new safari experience for safari-goers who wish for something different and new. The Big Five of the sea – sharks, whales, seals, penguins and dolphins.

All of these magnificent creatures can be found on the coast of the Western Cape in South Africa, from Cape Town to Hermanus. The best part of this kind of experience is that you can enjoy it on land or in the ocean. Here we look at each of these striking creatures and where the best places are to find them.

Encounters with dolphins are extremely common in South Africa as dolphins tend to stick in waters of about 30 meters deep. The three most popular dolphins are the Common, Indo-Pacific Bottlenose and Humpbacked dolphins. Common and Bottlenose dolphins love to interact with people and boats. They are often seen playing near surfers and the wakes of boats that are looking for them or playing nearby. However, the Humpbacked dolphin is the shyest of the lot and tends to stay away from people and boats. These dolphins can be recognised by the unique hump under the dorsal fin. The best land-based dolphin-watching places are along the Garden Route – Plettenberg Bay. However, they can be seen on the shores of Cape Town – False Bay and Simon’s Town. There are also dolphin-watching boat tours or kayaking in the ocean. It’s illegal in South Africa to swim with dolphins so steer clear of companies that offer this. 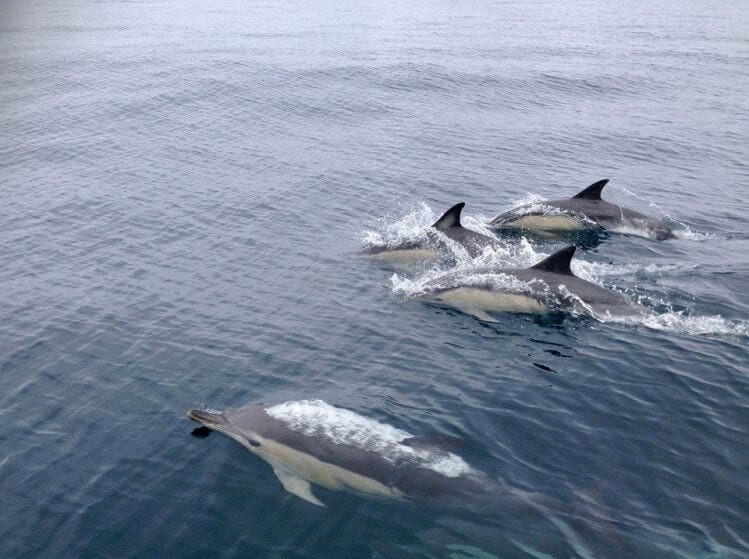 Dyer Island is a hot spot for dolphins, seals and sharks. It is home to the endangered Humpbacked dolphin. The sardine run is a yearly migration of silver pilchards that travel northwards along the east coast. It occurs from May to July and creates a ‘feeding frenzy’ for the Common and Bottlenose dolphins. This migration on its own is a spectacular attraction, with pools of dolphins following the fish. There are about 18000 dolphins that follow the migration, making this one of the great shows of nature.

The Great White Shark is a threatened species today, however, it is still one of the most feared and amazing predators in the ocean. South Africa is home to roughly 2000 of 5000 Great White Sharks left in the world. Dyer Island is considered to be the shark-diving capital of the world as you can cage dive with Great White Sharks. There is still a huge debate if shark cage diving is a good idea because chum is used (bait, fish parts and blood) to attract sharks to the cages. This means that sharks will start associating feeding with humans. Great White Sharks can grow up to 6 meters long and can weigh up to 3000kgs. 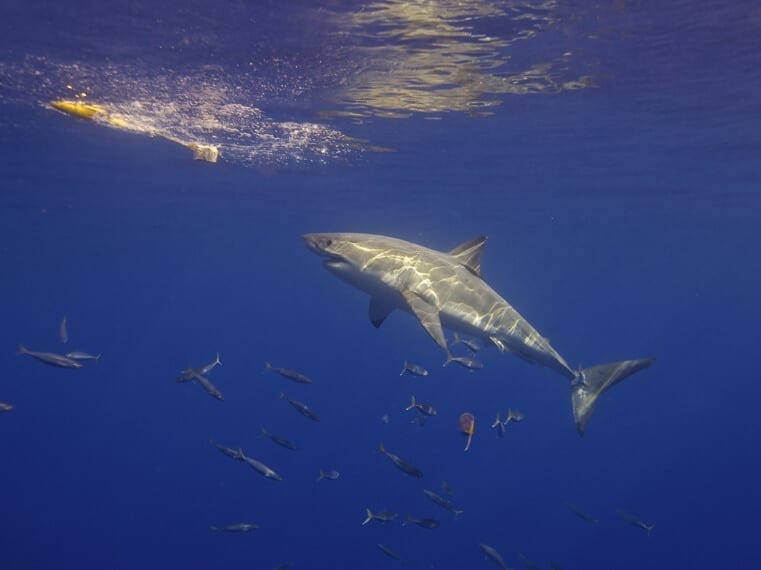 Their senses can identify electrical impulses that their pray (seals, fish & dolphins) give off. However, the most common pray is seals and sharks have special hunting methods. One method includes the shark swimming beneath the seal, swimming up towards the seal and the water's surface at speeds of up to 40km/hr or 25mph, hitting the seal which results in the shark coming out the water or sometimes flying 3 meters into the air. Simon’s Town offers boat trips to view the behaviour of sharks, but again the debate as to whether it is a good idea as they lure the sharks to breach. Whichever way you view these amazing creatures, it is an experience you will always remember.

The magnificent Southern Right Whales migration takes place every year from June to December. Over 3000 whales come from the Antarctic to the coast of South Africa to mate and look after their young. Walker’s Bay is one of the best places to view the whales as there is a lot of whale breaching and firing of water from their blowholes. 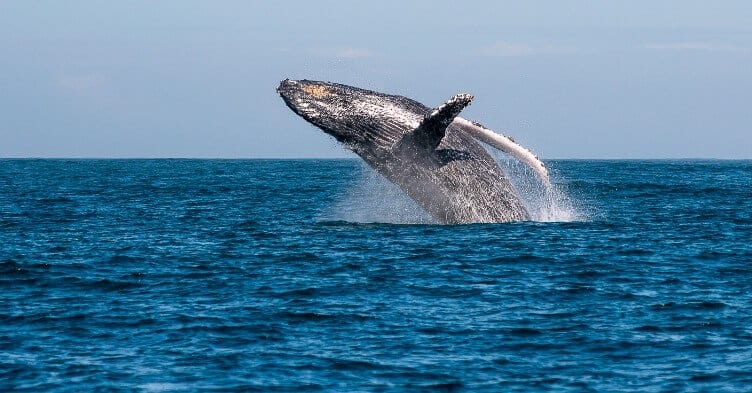 Hermanus and De Kelders have cliffs and a coastline that offers amazing viewing points for land-based whale-watching. There are also boat rides which allow you to get up close to these magnificent creatures. There is also whale-watching from the sky which involves a helicopter flight of 45 minutes over the ocean. The viewing experience allows you to realise the size if these creatures. The Western Cape is not the only place to see the whale migration as these animals travel over extensive parts of the coast in South Africa.

The African Penguin can grow up to 70cm tall and usually weighs 2 to 5kgs. They may be a little clumsy on land but make up for it in the water swimming alert and fast. The African Penguin is considered an endangered species and all breeding sites are protected. Dyer Island visitors are given the opportunity to learn about the colonies there and the measures used to protect them. Boulders Beach in Simon’s Town allows you to walk on the beach and swim in the sea with the penguins. Betty’s Bay does the exact same as Boulders Bay, however, there are fewer tourists there. Both of these places charge an entrance fee to limit people and all the funds go toward the conservation. An ideal time to visit these places would be in the morning or late afternoon when these comical birds come back from fishing.

The Cape Fur Seal is the only seal to reside in South Africa. There are millions of them in colonies all along Africa. However, one of the largest colonies is on the west coast of South Africa at Kleinzee. There are over 450,000 seals in this colony. There are smaller colonies in Cape Town, Gansbaai, Hout Bay and Plettenberg Bay. 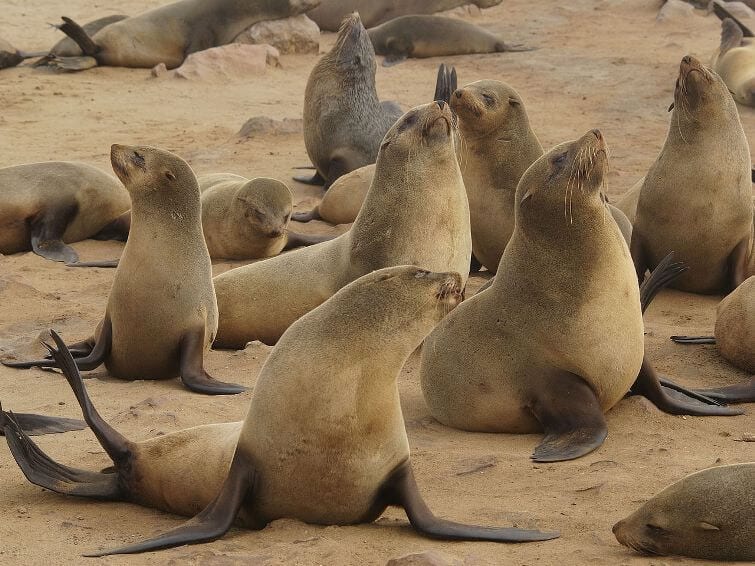 Geyser Rock is near Dyer Island and is home to a colony of about 60,000 seals. These seals are the main food source for the Great White Sharks. The seals on Geyser Rock produce around 10,000 – 20,000 seal pups a year but not all of them survive. Seals in False Bay utilise anti-predatory tactics – harassing the sharks, swimming to cause confusion, swimming in big groups and using their speed and positioning to stay one step ahead. These seals are playful and curious animals, swimming alongside boats and often venture closer to explore. They are extremely playful with divers and snorkelers.

So why not venture on the wild side of the ocean on your next South African holiday?