Becoming One With Painted Wolves

Painted Wolves or better known as the Wild Dogs of Africa

Safari jeeps of excited humans often fixate on the Big Five usually unaware of the term’s hunting origins. No one forgets the first time they gaze upon a grazing giraffe, wandering warthogs, graceful gazelle, humphing hippos and the zany-patterned zebras. Initially, I was thrilled to witness a tick-list of animals, only later becoming interested in less popular wildlife. At the start of this trip, I wasn’t entirely sure what a ‘wild dog’ was.

Wild Dogs off the beaten track in Mozambique

This changed after a visit to Niassa Reserve located in northern Mozambique. With poor road access and limited facilities for tourists interested in photographic safaris, Niassa is a rarely visited wilderness. Venturing off into the dense bush, we found the animals skittish around cars and hardly saw wildlife. The landscape and challenging 4WD tracks more than compensated for this, however, so we returned to camp in the evening, feeling satisfied. Suddenly Giles spotted movement. Three pairs of shadowy, Mickey Mouse ears protruded like flags from the long grass, marking the position of the wild dogs. Our first sight and a rare treat; when once they were so abundant being almost half a million, now there are less than 7000 in Africa.

Back at the camp, conservationists were anxious to hear about our sighting and enthusiastically informed us about wild dogs, which they preferred to call painted dogs or painted wolves, owing to their attractive mottled white, black and brown coat. Each one has a unique, specific pattern and, even although this doesn’t change with time, the honey brown colour develops after their birth.

Our second sighting occurred months later in South Luangwa, Zambia. Towards midday, after hours in the car, we were exhausted, hot and hungry. Rounding a bend in the road, two appeared before us. Shocked, we fumbled to grab our camera. Failing to achieve the perfect shot, our only trophy was a handful of photos showing their rumps as they scurried away into the bush!

In the past, farmers and Rangers saw hunting painted dogs as a form of pest control. Today, poaching with open snares is a threat to the population. Packs grieve the death of each dog and the death of even one can have a detrimental effect on the pack. We were honoured to meet three members of the PDC (Painted Dog Conservation) in Zimbabwe who inspired us with their tireless efforts to assist conserve and strengthen the Painted Dog population. They explained that along with poaching and diseases, such as rabies and distemper, traffic accidents are responsible for the death of many dogs. 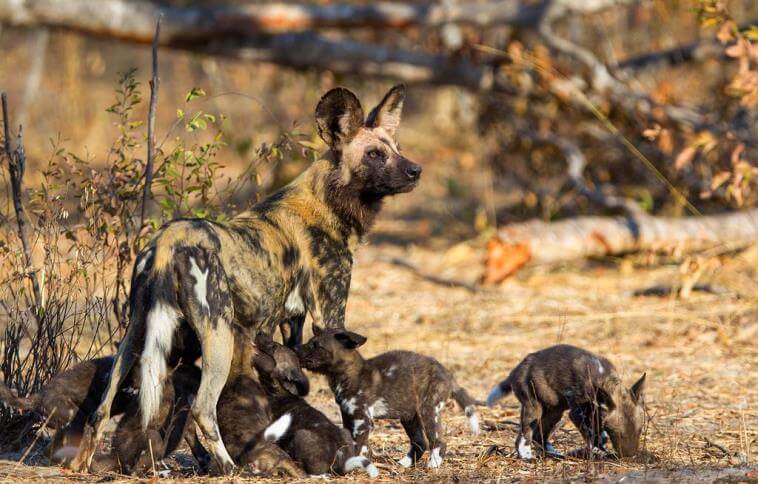 To raise awareness, signs have been erected along the main road near Hwange, entreating drivers to reduce their speed. Also on this road, the PDC has established the Interpretive Hall – a facility that I cannot recommend highly enough. Telling the story of a pup’s life, the exhibit is an accessible, fascinating, as well as serves as an entertaining method of educating locals and tourists alike. I’ll be honest – everything I know about painted dogs comes from this display and from chatting to the PDC members. If you’re visiting Hwange, be sure to pop in!

By the time we reached Botswana, I was a painted dog enthusiast. As pack animals, they look after one another, caring for the sick and elderly. Unlike lions, which may fight over a kill, wild dogs devour their prey, later sharing food with the rest of the pack by regurgitation. Pups are always fed first.

In Botswana, we discovered the area of a den. Three adults lay in the shade, caring for their nieces and nephews who played nearby. Only the dominant male and female breed, while the aunts and uncles help to care for their sibling’s offspring. Watching the 10 pups play, I was struck by how similar their behaviour was to domestic puppies. A dull black and white, they lack the startling beauty of the adults.

In a flurry of excitement, three more adults appeared, allowing us to view a joyful reunion. Pups bounced between the adults, eventually settling to suckle their mother. She didn’t look well. Her fantastic coat clung to her ribs; her tail was dirty and limp. After the feeding, the pups settled, occasionally rising to annoy the resting adults. Enchanted by the puppies, we spent a surreal day observing the pack.

From a state of complete ignorance, our informal education, delivered by a group of dedicated, passionate conservationists, opened our eyes and hearts to Painted Dogs and was awarded a genuinely intimate encounter. Lion, leopard and cheetah are all wonderful, but I’ve learnt that I’m more of a dog person.