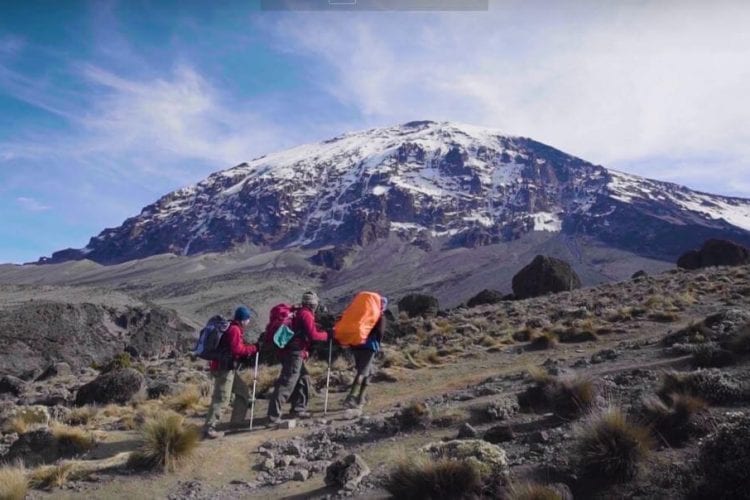 The climate zones of Mount Kilimanjaro

The southern lower slopes of Kilimanjaro contain ample evidence of human activity. The original scrub and lowland forest have been replaced by grazing land, cultivation and densely populated settlements fed by water permeating from the forest zone. The slopes were originally earmarked by the British and Germans as potential settlement areas due to the 'European' weather. These lush and fertile lands are in stark contrast to the northern slopes where low rainfall coupled with the porosity of the lava soils prohibits cultivation. There are none of the larger mammals in this zone but some of the smaller tree-dwelling mammals are numerous such as bushbabies, tree hyrax and genet.

The forest belt completely encircles Kilimanjaro and provides the best conditions for plant life. It serves as the water provider for all the lower slopes with up to 96% of all the water on the mountain originating from this zone and then percolating down through the porous lava rock to emerge as springs. The forest supports a variety of wildlife including several large mammals such as elephant and buffalo and in certain areas, it is compulsory to have an armed guide. Occasionally eland inhabits the upper fringes of the forest. Colobus and blue monkeys are common, along with bushbuck, duikers, leopard and bush-pig. The forest is often cloaked with a band of cloud, particularly between 2500m and 3000m.

This cloud promotes high humidity and dampness year round. Whilst clear nights can get pretty cold, during the day temperatures rarely leave the range 15C to 20C.

This semi-alpine zone is characterized by a heathland type of vegetation and abundant wildflowers. However it is two distinctive plants that are of particular note:

Lobelia deckenii: This lobelia is endemic to the area and is exceptionally striking. Growing up to 3m high, it has a hollow stem, a tall flower-like spike and spiralling bracts that conceal blue flowers. In order to protect the sensitive leaf buds from the sub-zero night time temperatures, the lobelia closes its leaves around the central core, while the covered rosettes secrete a slimy solution that helps to insulate and preserve the more sensitive tissues.

Senecio kilimanjarin: This giant groundsel is again endemic and is one of the most spectacular plants of all. It can reach 5m in height with a crown of large leaves and a metre long spike of yellow flowers. Close relation Senecio cottonii can grow at even higher altitudes than the Senecio kilimanjarin and uses its old dead leaves as insulation around its trunk.

This zone does not support abundant wildlife due to its altitude but there have been sightings of hunting dog, buffalo, elephant and most commonly eland. The Shira plateau is even occasionally visited by lions. Smaller mammals are more common and support a few predators such as civets, servals and leopards.

The temperature of the Kilimanjaro semi-desert zone ranges from sub-zero at night to 30C during the day. Water is scarce and there is little soil to retain any moisture. There are only 55 recorded plant species that survive at this altitude. Lichens and tussock grasses are present in reasonable numbers, as are some mosses. But as the soil is subject to movement overnight as the ground water freezes, most root plants find life extremely hard. There are no resident larger animals in the desert, although eland, leopard, serval and hunting dog all pass through on occasion. Only a few birds can survive in this rarefied air and once again none are resident. Ravens and some large birds of prey will hunt during the day but head downhill with the sunset.

THE SUMMIT OF KILIMANJARO

An arctic zone characterized by freezing cold nights and a burning daytime sun. Oxygen levels are half that of sea level. There is minimal liquid surface water because of a combination of low rainfall and porous rock, and the bleak terrain supports minimal life forms. A few lichens grow, but only at a rate of about 1mm per year, so even the most unimpressive-looking spread is probably of venerable age. The highest recorded flowering plant was a Helichrysum newii at 5670m within the Kibo Crater but these are few and far between, as are sightings of mammals at this altitude.

There are however two particular sightings that have made it into folklore ...

The Frozen Leopard : Originally discovered and recorded by the local missionary Dr Richard Reusch in 1926 and later having the misfortune to feature in Ernest Hemingway's unbearably self-indulgent book The Snows of Kilimanjaro. No one knows quite what the leopard was doing up here. Reusch recorded that he managed to cut off one of its ears to take home as a souvenir. Some years later someone unknown made off with the whole thing, never to be seen again.

Wild Dog : In 1962 Wilfred Thesiger, George Webb and Effata Jonathon encountered a pack of five hunting dog at Hans Meyer Point, around 5,000m. As the men continued to the summit the dogs followed at a parallel distance of about 300m all the way to Uhuru Peak, where they watched the men dig out and sign the log book. Fearing an attack, the men began to descend but the dogs disappeared over the crest and were not seen again.