The geology of Mount Kilimanjaro 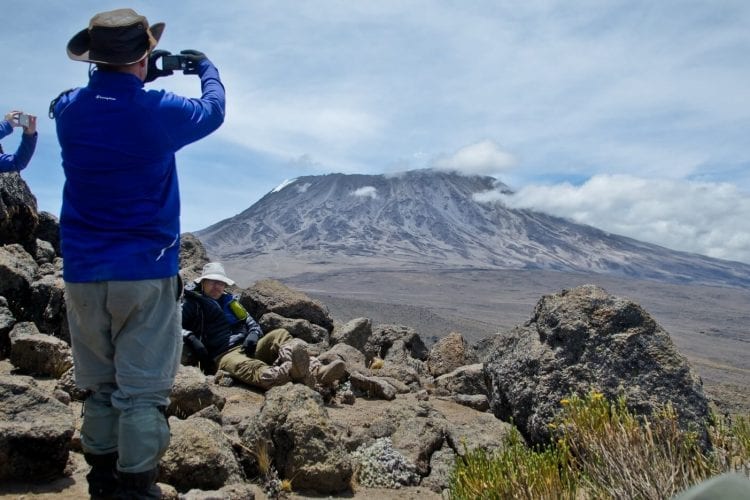 In 1887, Professor Hans Meyer, a German geographer, made his first attempt upon Kibo, the main summit of Kilimanjaro. Accompanied by Baron Von Eberstein, Meyer was eventually defeated by a combination of thick snow, thirty-metre ice walls and his partner's altitude sickness. The following day, from the safety of The Saddle, Meyer estimated that the ice walls descended to just below the Crater Rim at an altitude of about 5,500m. The ice was continuous over the entire peak and it was evident that the summit could not be reached without some considerable ice climbing. After an aborted expedition in 1888, Meyer returned the following year accompanied by the renowned Alpinist, Ludwig Purtscheller and a well organised support group determined to scale the peak. The climbers came prepared with state of the art equipment and established a base camp on the moorland from where porters ferried fresh supplies of food from Marangu. Daunted by the precipitous ice cliffs of the northern Crater Rim and the extensive ice flows to the south, the two climbers agreed that the best chance of success lay by tackling the less severe incline of the southeastern slope of the mountain.

From their advance camp at 4300m, the two climbers set off at 01.00hrs and reached the lower slopes of the glacier at about 10.00hrs. Although the glacier was not as steep or high as the walls encountered on Meyer's previous attempt, the incline never fell below 35 degrees and ice steps had to be cut. Progress was slow but after two hours the men reached the upper limits of the glacier where the incline decreased. A further two hours of painful trekking through waist high snow and over deep weathered ice grooves found the climbers at the rim of the crater with the summit in sight. However time and strength were running out and the summit was still another 150m above them, so they returned to advance camp.

Three days later they tried again. This time the route was clearly marked and the previously cut ice steps had held their shape. The rim was reached in six hours and at exactly 10:30hrs Meyer became the first recorded person to set foot on the highest point in Africa. Although Meyer and Purtscheller laid the trail for further ascents of Kilimanjaro, there was not an instant queue of would-be climbers. It wasn't until 1912, over twenty years later, when a path from Marangu was established and the first huts at Mandera and Horombo were built by Dr. E Forster of the newly formed German Kilimanjaro Mountain Club, that activity began in earnest.

The outbreak of war in 1918 however delayed further expeditions and the building of the Kibo Hut. The year 1929 saw the next stage in the opening up of the mountain with the formation of The Mountain Club of East Africa (now The Kilimanjaro Mountain Club). Founded by C. Gillman, N.Rice, P Ungerer and Dr. Reusch. Kibo Hut was finally completed in 1932, hotels began to organise safaris onto the mountain and the public began to reach Gillman's Point, with a few of the hardier going on to the summit.