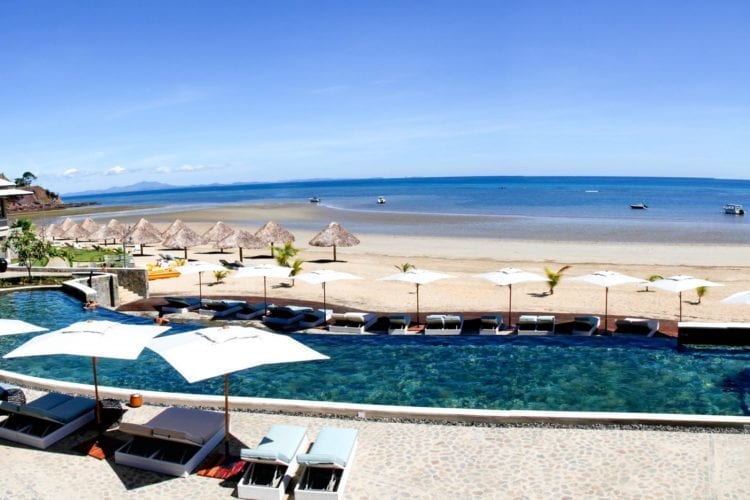 Palm Beach is situated on the south west coast of Nosy Be Island near the village of Ambondrona. This elegant, modern resort has 63 rooms, 2 restaurants, 2 bars, a pool and spa. The kids club and playground will be a hit with your little ones. The hotel offers European cuisine and live music. Large family rooms and wheelchair accessible rooms are available. Palm Beach is 30 minutes from the airport and 15 minutes from Hell Ville. Activities include: Kayak, Paddle SUP, pedal boat, 2 tennis courts, football, basket-ball, bocce, beach volley and a play area for kids.

Nosy Be is Madagascar’s most popular beach resort. Located in the Mozambique Chanel, the island’s best beaches are on the western coast. The name means ‘big island’ and the climate is nearly perfect all year. The largest town is Hell-Ville named after the French colonial governor of Reunion, Admiral de Hell. While the beaches are stunningly beautiful, snorkelling and scuba diving are best undertaken on the other islets of the Nosy Be archipelago. A variety of yacht charters are available through your hotel to take you diving or snorkelling off the nearby islands. Turtles and dolphins can be seen year-round and humpback wales visit annually between mid-August and October. Deep sea-fishing, jet-skiing, windsurfing, water-skiing, kayaking and horse-riding are also available. An international golf course opened on the island in 2014.