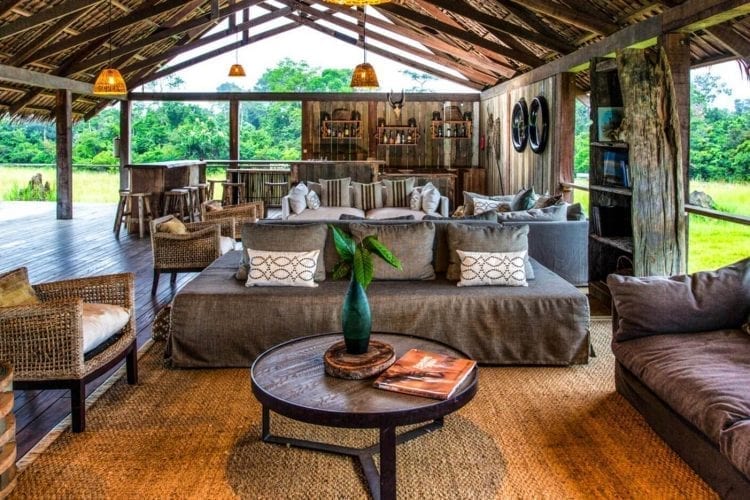 The largest of the three Camps in and around Odzala, Mboko offers perhaps the most comprehensive Odzala experience as it is situated within easy reach of three the key habitats of the park: savannah, forest and river.

The twelve guest rooms (including two family rooms) run in a line along a swift, clear tributary of the Lekoli River. A deck by the river is the perfect place to relax during the day, and a footbridge connects with a walkway that leads through the forest to lush savannah punctuated with distinctive red termite mounds.

Mboko itself is situated in a further expanse of meadow-like savannah, which frequently bursts into colour as wildflowers come into bloom. Forest elephant and buffalo frequently pass right through the Camp; indeed, one or two of them spend so much time there that they have become well-known celebrities in their own right.

Mboko acts as the ‘adventure centre’ for Mboko. From here, you can kayak, boat or even fat bike into the park to uncover its secrets and explore its hidden corners. The forest blocks close to Mboko are known to contain central chimpanzees and western lowland gorillas, and hyaena are frequently spotted.

Tracks in the roads hint at other creatures that live in Odzala, with civet, serval and even golden cat leaving their distinctive marks in the mud and sand.

After a day of exploring, there are few finer feelings than pulling a chair up to the camp fire and sharing a cocktail and Odzala tales with your fellow guests. Depending on the season, the sunset either sees incandescent clouds or is the prelude to some of the finest ‘starscapes’ you’ll ever see.

Situated on a slight rise, the main buildings of Mboko are visible from a distance. As dusk settles, the lights of the Camp are a beacon of comfort and welcome in this immense landscape