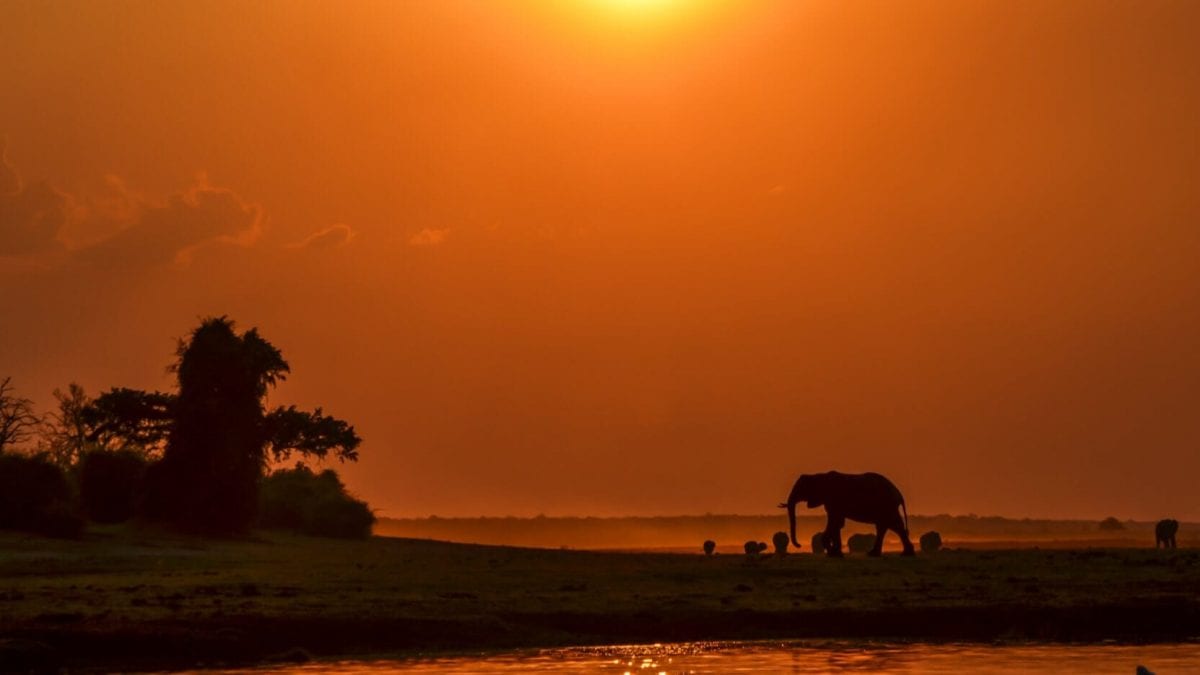 Ranking as the second largest park in Botswana, Chobe National Park is also one of the most famous. The elephant population here is the largest in all of Africa with approximately 50,000 elephants in the park at any one time.

Their numbers are staggering and awe-inspiring, especially when seen concentrated on the banks of the Chobe River. Some very rare antelope also call this place home, including Sable, Roan and Puku. The boating safaris here are some of the best in Africa and offer a great chance to see hundreds of hippos, crocodiles and other wildlife from a very different perspective. The park is very easy to access with flights directly into Kasane and Victoria Falls/Livingstone are only an hour’s drive away.

Unfortunately, because of this accessibility, the park is exposed to very high levels of self-drive and overland safari traffic. The worst of this traffic is usually focussed around the busy Kasane area. There are two notable exceptions which are worth considering here though. The first is Chobe Chilwero, which is the most luxurious lodge in the area and offers fantastic low season rates. The second is Chobe Game Lodge, which is the only lodge to be situated inside the park itself and enjoys a quieter riverfront location.

If budget is a concern, then two or three nights in Chobe can certainly help to bulk up your itinerary. In this case we would recommend staying further west in the Chobe Forest Reserve, either at Ngoma, Muchenje or Chobe Elephant Camp. These properties still offer access to the national park itself but, because they are situated outside, they are also able to offer night drives and walking safaris in addition to the usual game drives. You then have the added benefit of steering clear of the Kasane traffic.

Further south-west, away from the Chobe River we come to an area known as Savute. This area has long been known for offering some phenomenal game viewing, fuelled by the rich Savute Marsh. This is the land of the elephant-hunting lions and a host of other predators including leopard and hyena. The wildlife interactions here can be incredible but unfortunately there is also a lack of diverse activities (game drives only) combined with no off-road driving and relatively high vehicle traffic to contend with.

Why is Chobe National Park a top tourist destination?

Chobe National Park is not only famous for its herds of elephant, but also buffalo, and the associated predators such as large prides of lion that have learnt to hunt them. There are also numerous antelope, plain game as well as herds of hippos wallowing in the shallow of the Chobe River. Added to this, birdlife is spectacular - so make sure you pack in your binoculars.

What activities can I look forward to at Chobe National Park?

A game drive - It probably goes without saying that heading out on at least one game drive whilst in Chobe National Park is an absolute must. A boat cruise down the Chobe River is also highly recommended, as this gives you a different perspective on wildlife sightings. Guided walking safaris bring you so close to nature that you learn more about the small things you miss when travelling in a vehicle. Photographic safaris are also a favourite here. For those who need a bit more action there is also fishing and a tour to the surrounding villages.

What is Chobe National Park known for?

Chobe National Park is a true wildlife paradise and one of the best national parks in Southern Africa. The Chobe River flows through the park and draws many animals and birds during the dry season, especially those that migrate (including desert elephant, zebra and other antelope) from Namibia to Botswana in seek of food and water. Boat cruises and game drives along the river are also very popular.

When is the best time to visit Chobe National Park?

Chobe can be visited throughout the year. The second largest wildlife migration in Africa takes place through the park with the season changes. The riverfront area is best visited in the dry months, from May to October.

August to October are the optimum months for wildlife viewing here, but it gets extremely hot at that time.

Chobe Chilwero is the most luxurious safari lodge in the greater Chobe region and is situated on the edge of Chobe National Park upon the Chobe Riverfront. It offers standards of service, accommodation and all round excellence at such high levels that make it arguably one of Botswana’s top luxury offerings.

The Lodge is owned by Sanctuary Retreats whom we feel have mastered the art of creating harmony between 5 star luxury and safari authenticity, a particularly difficult skill to achieve. There are 15 glorious suites, all outfitted in absolute style and class. The attention to detail here is obvious and the rooms are great retreats in which to relax in when not on safari ... Read more

The Chobe Princess is a floating safari lodge in essence on the Chobe River of Botswana. There are actually 3 boats that share the same name but are all very similar in design and spec. This is a very unique way of experience safari and something we whole heartedly recommend. The houseboats are spacious, beautiful serviced to very high levels with good food comfortable accomodations and of course a ugely relaxing aura.

The Chobe Princess allows you to experience the incredible diversity and concentration of wildlife that Chobe National Park has to offer whilst be able to return to the relaxing and intimate river residence experience ... Read more

The Zambezi Queen is a luxury 42-metre houseboat offering a truly unique and adventurous river safari holiday in one of the most remote locations on the planet, while still being surrounded by comfort and elegance.

The houseboat consists of 14 suites featuring your own private balcony, where you can enjoy unobstructed views of the Chobe River and game viewing right from your room. There are three room categories here. The standard suite, Master Suite and a triple Suite. All appointed beautifully and very comfortable. What we particularly like about the rooms are the views from each suite, out over the Chobe river and African bush beyond. Waking up in the morning and looking out is pretty incredible, to say nothing of the wonderful sounds of the river at night ... Read more

Linyanti Ebony Camp is a wonderfully small exclusive and intimate bush camp set in the Chobe Enclave region where the Linyanti reserve and greater Chobe area meet, away from the main traffic areas. The camp sits along the Linyanti waterfront with beautiful views out across the floodplain.

The small size of the camps affords exceptionally high levels of service across the board whilst in camp and on safari with all members of staff excelling at their respective roles. The camp is owned by Africa Bush camps, one of the most authentic, pioneering style of safari company in Southern Africa ... Read more